I feel really sad that more and more, people are jumping into conclusions and deciding how to feel about others just based on one's appearance.

On the last day in London this recent trip, we made our way to Hampstead Heath, a nice ‘suburb’ we always like.

In the train, we were seated diagonally across from a young South Asian man, who was reading his religious book and chanting very intensely.

Across from him was a young couple, probably from the same area, smooching in public and playing with a shisha pipe.

I just couldn’t help noticing how angry the man opposite us was becoming.

With the recent spates of violence all over the world, I was really worried and contemplated a few times to tell MLGF, “Don’t ask me now, follow me and let’s just get out.”

Each time the train was approaching a station, I told myself to just do it. The whole time, I was glancing his way, looking at the couple that seemed to have offended him, and then looking around to see and to imagine, “What if?”

Finally, after about 10 stops, the man left and I also couldn’t help noticing he had a large luggage which I did not see earlier.

I trained my eyes on him as he walked along the platform until he disappeared.

I hate to say this but I was really spooked and angry with myself at the same time.

The only reason I did not drag ourselves out was because I felt that I would not be very different from people who just assume things. I really didn’t want to be stereotyping others. I knew that even though the guy probably didn’t know what I was thinking, I would have just wronged an innocent man because I succumbed to fear.

I feel really sad that more and more, people are jumping into conclusions and deciding how to feel about others just based on one’s appearance.

Even worse, some of us are also letting fear dictate how we live.

In recent months, some friends have been telling me that they have decided to avoid crowded places. I know where they are coming from and seriously, I have my concerns too.

But I have been reminding myself that this is exactly what the bastards want – for us to be paranoid and for us to hate each other.

I am really glad that I let the other fear – the fear of wronging someone needlessly – win. 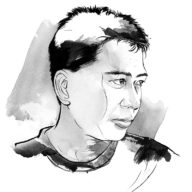